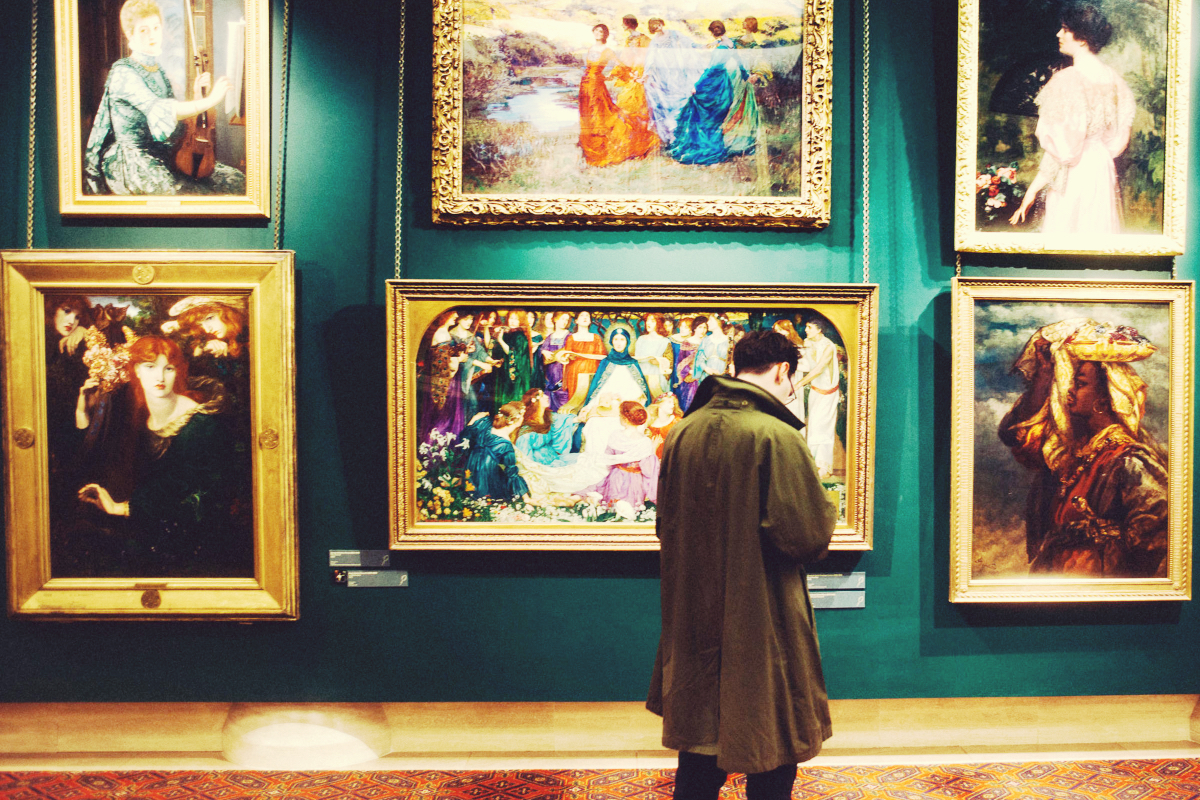 The woman continued to lean across the barrier. Its taut metal wire dug into her voluminous black skirt as she tapped the screen of her phone, adjusting the focus before snapping a picture. Einar took a steadying breath and waited. But instead of retreating, the woman bent closer to her subject. Einar eyed the white skin of her breasts teetering on the verge of escape from the confines of her lacy corset. A wardrobe malfunction would be the most excitement he’d had in months, but the breasts stayed put.

Einar gathered himself up and cleared his throat, summoning his best museum security guard growl. “You’re too close, Madam. Step away now.”

The woman didn’t even bother looking at him, took one last hurried picture, and then swished away, purple-dyed hair swaying, black boots echoing against the gallery walls.

Einar sighed and settled himself back into his customary position in the center of the room, long arms slung by his sides, feet planted squarely on the floor. The corseted woman had been another one of those misfit types. They seemed to have a real disregard for authority, but at least they broke up the monotony of his day. Without their frequent pilgrimages to the National Museum’s Grå og Grønn Room he’d probably never see another human until his shift ended at four o’clock. Now that the woman was gone he was alone, as usual, with his charges.

Grå og Grønn. Gray and Green. The colors of the Aarhus family crest. Some wrinkled patriarch of the Aarhus clan made sizable donations to the museum. In return they’d named this overgrown alcove in his honor and hung up the dusty collection of family portraits he’d bequeathed to the people of Norway. Einar looked at the solemn faces of long-forgotten Aarhus ancestors and thought once again that even this small space was too grand for them.

All but one, perhaps. The one that drew quirky visitors like that woman. The one painting in the room worth the nail it was hung on. The Bueskytter. The Archer. She was tall and fair, a faint smile lifting the corners of her rosebud lips. She wore a strange dress of muted red, certainly unusual for the time period, and in one hand she held a golden bow. In the other, pinched between two dainty fingers, was a black arrow. She peered out confidently from the frame with an uncanny glint in her eyes.

Yes, Einar could see her appeal. And the legend was interesting too. Some called it a curse. Stand too long before the Bueskytter and she’d put her bow to work, piercing the obtrusive viewer through the heart with her magic arrow so that they’d disappear and the Bueskytter would regain her view of the world. With a reputation like that, she’d become a bit of a patron saint for the outsiders and unnoticeables of the world.

Interesting, but complete nonsense. Einar would know. He’d stood in front of the Bueskytter six days a week for hours at a time and never once seen her take aim.

Footsteps in the hall snapped Einar to attention and a man sauntered into the room. He was pale, with heavy eyeliner, shiny black suspenders, and an olive drab coat. A camera hung from his neck and when he saw the Bueskytter he lifted it and pressed the shutter button. Einar blinked, temporarily blinded by the ensuing flash.

“Hey,” he blustered, pointing to a sign on the wall, “no flash, sir. It says so right here.”

The man took two more shots with the offending flash burning black spots into Einar’s vision before settling the camera back on his neck and taking his leave.

“The nerve of some people,” Einar muttered to himself. “No respect for museums or the paintings or for people just trying to do their jobs for that matter. Might as well be invisible.”

Einar stopped fuming, and a shiver ran down his spine.