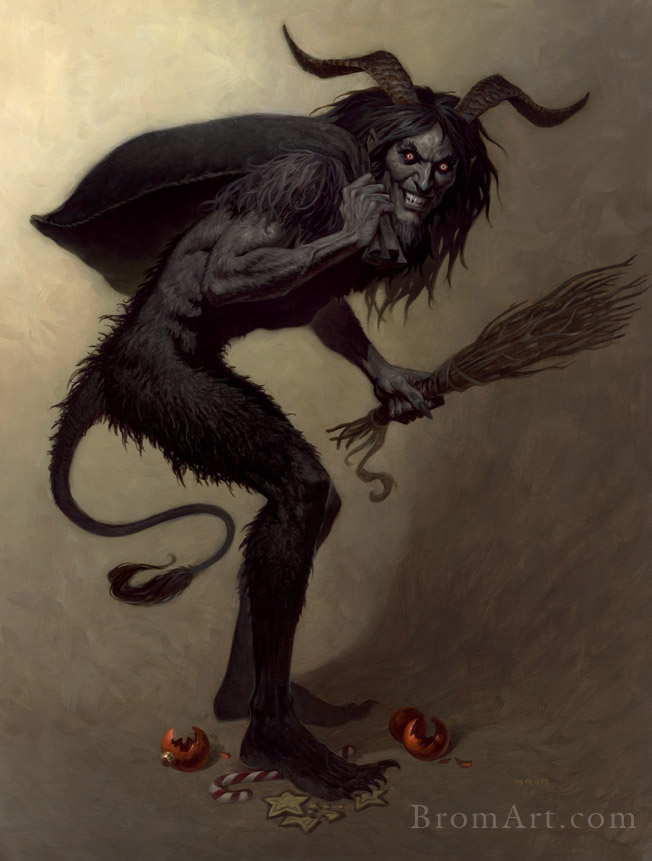 My Christmas gift to you: some flash fiction with a dark, yuletide theme. Krampus is a creature that’s gotten a lot of buzz lately and for good reason. He’s an odd sort of demon with German origins (no surprise there) that was used to frighten ill-mannered children into behaving. Because, really, what good is the threat of a stocking full of coal when you have a monster with a whip and chain ready to haul you away for some good old Christmas Eve torture? Anyway, I just couldn’t resist writing a short story with this demon as the star. So curl up by the fire and take a minute to read Nothing to Dread, and be thankful you’ve been a good little boy or girl this year. Right?

Once upon a time there was a boy named Cole. Cole was tall and wide, with small eyes, a square jaw, and a constellation of freckles on his cheek in the shape of Missouri. Boys like to cause mischief they say, but Cole was beyond mischievous. The neighborhood children ran when they saw his hulking form at the end of the street. The last kid he’d caught spent a night in the hospital. Animals that knew him cowered in fear, and those that didn’t paid the price. He sneered at authority, scoffed at rules, and shrugged his shoulders no matter the punishment.

Cole had a long-suffering sister named Paige. She was his opposite in every way: small, slim, with an angelic face and a heart to match. Cole loved to torment her all the more for her beauty and compassion. He would punch her when their parents weren’t looking, in the ribs or the stomach so it would be hard to see the bruise. He’d sling mud on her as they went to school, and rip up her carefully completed homework. He called her every name in the book, and even some that weren’t.

One day, with aching ribs, she asked her brother why he treated her so badly. It was a slate gray day in late December. A fine mist hung in the air, and the ground where she lay was cold and damp.

He bent low, his ugly face mere inches from hers, and whispered, “Because I’m heartless, dear sister.” And he tilted his head back and howled with laughter before he spat in her face and lumbered away to ruin someone else’s day.

Paige only smiled. The spit was just what she needed. In her pocket was a little black figure. She pulled it out and used it to rub away her brother’s saliva from her cheek. As she did, the figure’s eyes glowed red, so quickly that it might have been a trick of the light, but she had seen it.

Paige spent a lot of time at the library. It was her refuge, the one place where she knew her brother would never venture. The books were her friends, the stacks her buttresses against the cruelty of her flesh and blood. She spent most of her time in the myths and legends section. And in a small, red book, on a dusty top shelf, she had learned about Krampus, the devil of Christmas.

She had learned what he did to naughty children, and, most importantly, she had learned how to summon him. Because while Santa made it a point to visit all those who believed in him, Krampus couldn’t be bothered with just any naughty child. He only showed up for the truly wicked.

The little figure Paige had made was his test and judging by the glowing eyes, Cole had passed with flying, fiendish colors.

Krampus would come, and come tonight. For tonight was Christmas Eve.

In the evening, she waited until the sounds of the house had quieted. She crept past her brother’s door and out to the living room. She was familiar with all of the hiding places in the house having used them many times as a means of escape. There was a favorite of hers in the corner, a triangular shaped space behind a chair that she slid into now and lay down, curling herself into a ball. She pressed her head against the cool floorboards so that she could see the bottom part of the fireplace. Then she waited.

At three o’clock sharp her eyes snapped open. There were noises coming from the chimney. A few pieces of soot wafted down from the flue. Paige blinked and looked again and there, in the black hole of the fireplace, two red eyes stared back at her.

She thought about screaming but held her breath instead, her heart pounding in her ears.

Two hands, covered in fur and with nails sharp and shiny appeared on either side of the hearth. Then a cloven hoof escaped the pitch black and then another, little puffs of ash lifting into the air as they settled onto the floor. Finally the rest of Krampus’s frightful body slid from the shadows of the fireplace.

Paige looked up at the creature in terror. It was at least seven feet tall. Muscles bulged around its neck and rippled down its back. Long, shaggy hair hung from its shoulders in great hanks. It had a tail and horns and carried a black sack that moved and pulsed as though things were trying to escape from its smooth, leathery confines.

The creature held her gaze for a moment more and then was off, fast and silent, around the corner and up the stairs to her brother’s room.

There was a thump, a small, muffled wail, and then silence.

Paige shuffled out from behind the chair on her hands and knees and was just about to stand when her hand brushed against something round and hard.

She looked up, and there was Krampus, red eyes burning. It was dark but it wasn’t hard for Paige to see the creature’s grin. Shining rows of sharp teeth glinted in the wan light from the streetlight outside. The creature brought a single finger to its lips and then was gone like a flash up the chimney, but not before Paige caught a glimpse of the pack flung across his shoulder. It was just a bit bigger than it was when he arrived.

She ran to Cole’s room. The sheets were rumpled. He was nowhere to be found.

Paige went to the window and watched as a single shadow slid over the moon. After that she could see no more but the night sky and the silver stars. She couldn’t see Krampus flying, landing amid snow drifts in the far north, couldn’t see the the creature disappear into dark cellar doors just below the cheerful glow of a fairytale workshop window.

She wasn’t there when the creature descended the steps to a subterranean chamber, and emptied its pack, the blubbering bodies of so many vicious and vile children rolling across the rocky floor.

She wasn’t able to see Krampus get to work, his real work.

You see Krampus is a bit of a miner, a prospector you might say. And Cole was wrong. He wasn’t heartless. There beneath the bone and sinew of his chest lay a heart, shiny and black. This is what Krampus was after, and the demon harvested it with a precision that only comes from years of practice, adding it to the cart on the track nearby. When the creature had taken the last desiccated organ from its Christmas haul, it pushed the cart to the furnace at the end of the cave and dumped the load into the flames so that it became not just a fire but an inferno.

That great fire swept up the flues and chimneys of the fairytale place in the far north.

Santa, just returned from his busiest night of the year, warmed his feet by the blaze in his room, then slowly drifted off to sleep as the last of the embers died away.

The smoke curled up and out onto the frigid wind, but died away long before it ever reached the tiny, beautiful face of Paige, eyes shining by the light of the Christmas moon.

Image credit: Brom, who, by the way, is an incredible storyteller AND artist (some people are born with all the talent). His book, Krampus: The Yule Lord, is amazing, as are all his others.