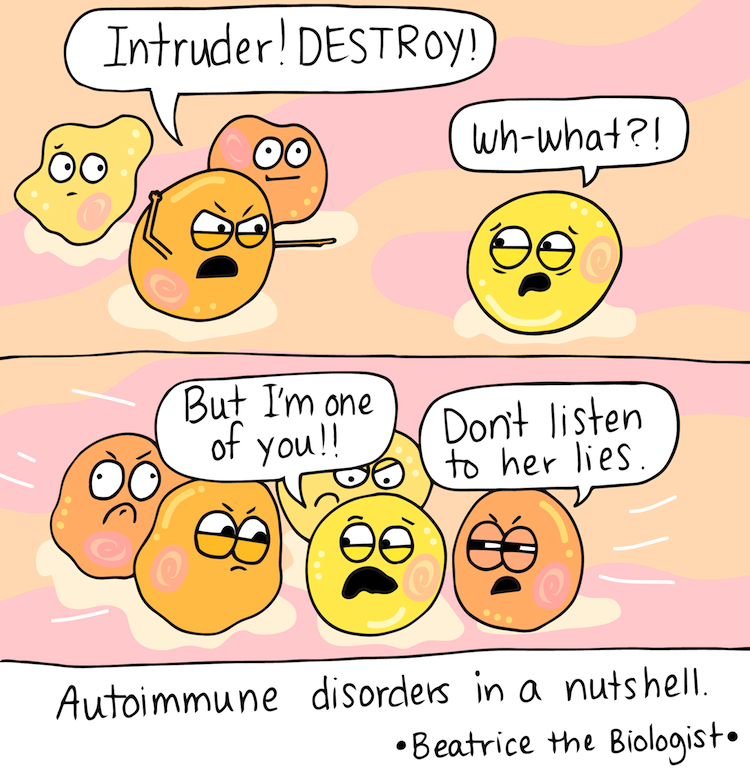 For the last few weeks I have felt generally happy and energetic. This is my baseline. My norm. But for the last four and a half years I’ve struggled to maintain this sense of overall well-being, and it’s all because of a little gland located at the base of my neck.

My thyroid is failing. My immune system is attacking it. I have a disease called Hashimoto’s Thyroiditis and no one is certain what causes it. The general consensus is you need to be genetically predisposed to the condition and environmental factors often play a part in bringing it on. In my case it was most likely pregnancy that made my immune system go haywire.

The thyroid is a small but super important part of your body. It plays a critical role in regulating the hormones that control your metabolism, the system that essentially keeps your body running. Well-intentioned plasma cells send antibodies to attack my healthy thyroid which then leaks the precious thyroid hormones my metabolism needs in order to function correctly. Hashimoto’s thus causes hypothyroidism, a condition where the thyroid gland can no longer produce enough thyroid hormones to control the body’s metabolism efficiently.

Pregnancy puts an extra strain on the thyroid and it may be this added stress that triggers the problematic immune response. Babies in utero rely on their mother’s thyroid hormones for healthy development. If they receive too little of the hormones, which can happen if the mother has hypothyroidism, they may suffer impaired brain development and a host of other nasty complications. This can all be avoided with medication. Pop a tiny pill of Synthroid every morning before breakfast and you’re good to go. But it remains very important for women to have their thyroid levels monitored throughout their pregnancy and beyond.

Yeah, so turns out it takes several months postnatal for your hormone levels to balance out to their prenatal levels. If you have a thyroid condition during pregnancy it’s even important to continue taking the medication. My doctor diagnosed me with hypothyroidism early on in my pregnancy with Bun and I took it faithfully. Thankfully, she was born perfect in every way. I assumed then that I was in the clear and stopped taking my Synthroid prescription.

Real pleasant stuff. It took me a while to understand that a lot of the issues I was having after Bun’s birth were related to my thyroid condition, that giving birth to her hadn’t made it go away. In fact it had made it worse and it was also affecting my ability to get pregnant again (see wonky periods in the list above).

After several years (!) and several doctors I was finally diagnosed with Hashimoto’s disease and got my prescription ironed out. Not surprisingly I felt better than I had in a long while. And, with all my systems a go, I was able to get pregnant. This time around I was more informed. I told my new OB/GYN right away about my condition and we managed it extremely well throughout my pregnancy.

And this time I was more careful with the “and beyond.” I was diligent about taking my daily dose of Synthroid and I felt fine. At my six week exam, though, my thyroid levels had actually dropped too low, so low that I now had borderline hyperthyroidism which is a separate condition with symptoms opposite of hypothyroidism. They lowered my dose of Synthroid and sent me out into the world.

All was well. Until it wasn’t.

My hormones must have still been in postnatal shock because a few months later I started to have all the same symptoms: feeling extremely tired (somewhat difficult to diagnose with a newborn keeping me awake but Bean was actually a pretty good sleeper), feeling overwhelming waves of sadness (I wrote a sad little blog post around this time. You can read it here if you want a good helping of mopiness and a dash of angsty determination.), and my old friend weight gain (I was training for a 10k and eating well but I gained five pounds seemingly overnight).

I went to my doctor and sure enough my levels were the highest, a.k.a. the worst, they had ever been. Up went my dose again and things have slowly evened out until now, nine months after Bean’s birth, I am finally back to my prenatal thyroid levels.

I feel strange saying I have an autoimmune disease. It doesn’t go with my self-image as a strong and capable woman. And I hate having my well-being in many ways tied to a pill. I’ve considered stockpiling it in the event of a zombie apocalypse as cardio is going to be important and I don’t want my hypothyroidism to slow me down or make me so weepy about the end of the world that I can’t hightail it to the nearest underground bunker.

And eventually, as my doctor likes to remind me in an overly nonchalant manner, my thyroid will fail completely and then my life will truly depend on a tiny little pill.

My doc thinks it’s no big deal. Fourteen million people in the USA alone have Hashimoto’s and there are even more with other thyroid disorders. Most of those people are women, by the way. But just because it’s common doesn’t make me feel much better about it.

One pill, every morning, for the rest of my life. It’s no hardship and it could be much worse, but it’s a daily reminder of the fragility of the human body.

I’m slowly coming to terms with it though, because in reminding me of my body’s weakness it also reminds me of its great strength. No body is perfect. Luckily, a perfect body isn’t required to enjoy life, to live it fully, to walk, run, dance, sing, laugh, cry, hug, pause, and repeat.

So I’ll keep swallowing my daily dose, thankful for each new morning that comes my way.

PS: If you have any of the symptoms I’ve described or if you are planning to become pregnant I urge you to get your thyroid levels tested. It’s a simple blood test that any doctor can order. When it comes to something as important as your thyroid, it’s better to be safe than sorry.

10 Things You Hate About Me: Why Being Friends with an Introvert is Hard