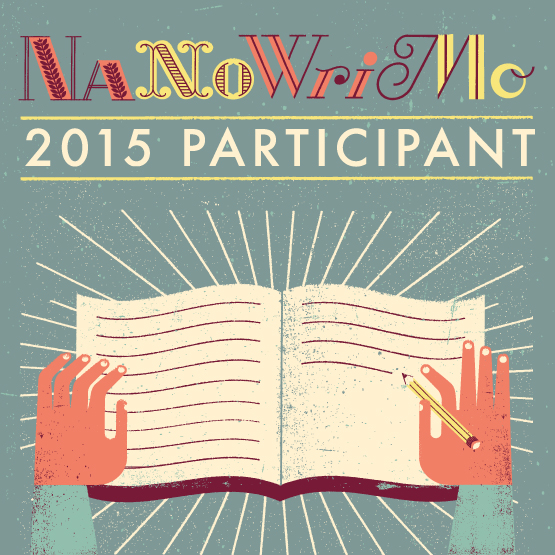 Each year a growing number of writerly weirdos decides to attempt 50,000 words in 30 days. That’s about 1,666 words a day. In 2013, the last time I did NaNoWriMo, I completed just under half that amount (24,014 words) and felt pretty darn good about it. Little did I know at the time that the vast majority of those hard won words would be cut from the final version of On the Verge. I was blissfully unaware of how much those first pages sucked, but they did serve an important function: they got me writing.

I’ve mentioned several times on this blog now how I owe the existence of my novel to (among other things, like a supportive family) NaNo. This time two years ago I saw a poster for the event at Third Place Books, my fav indie bookstore, and thought “why not, nothing to lose.” On November 1st, 2013, I started writing longhand in the chair at the salon while my hair processed. It was fun. So I decided to do it the next day, and the next. By the end of the month I was pretty excited. I was actually writing a freaking novel, something I’d always wanted to do, and I had a not-insignificant amount of words under my belt come November 30th.

In the following months (and years) I got much more serious about the story, and when I published On the Verge this past September it was the culmination of a ton of really hard work. But at the core of it, the writing came down to one simple thing: showing up every day and getting words down. After all, as some smart person said (either Nora Roberts or Jodi Picoult, according to Google), you can’t edit a blank page, and NaNo was the beginning of that realization. Show up, sit down, write, repeat.

That’s what I plan to do starting this Sunday.

And what, you may ask, will I be writing? Well, after a bit of deliberation I’ve decided to start the follow up to On the Verge! The story and characters are still calling my name. They have more to say it seems, and I am ready to put it down in writing for them.

Freya will still be the heroine of the sequel but the story will focus on her interactions with Dakryma as he tries to rid of himself of his magical servitude to Baba Yaga. I’ll also be introducing another creature of the Verge that will play a major role in the story. No give aways yet but she’s female and her intentions are unclear, and she may or may not have her eye on Rusty. Oh, and a mermaid and a sasquatch might make an appearance.

I’m super excited to get started. Dakryma and Baba Yaga are among my favorite characters and this time I’m beginning with an rough idea of where I want the story to go (unlike last time when I flew by the seat of my pants and hoped for the best). I’m also more aware of my strengths and weaknesses as a writer. One thing that has come up time and again from early reviews of On the Verge is the amount of description and the big words I use. Some people love the description. Others think it bogs down the story. The response seems to be about 50/50, and as Stephen King says in his book On Writing, in regards to critiques a tie goes to the writer. So I’ll still have my descriptions, but I’ll try toning it down a bit. And I’ll definitely put the kibosh on the big words. Wait is kibosh a big word? Okay, maybe not all the big words. Sometimes it’s okay to crack open a dictionary if you don’t know what a word means. Just sayin’.

And while I’m super excited, I’m also a little nervous. There’s always that fear at the beginning of any new project, but especially a creative one, where you have that sense of foreboding: will I be able to do it again? What if it isn’t as good as the last time? The simple answer is there are no guarantees. Just a belief in your abilities, faith in your creativity, and a steady supply of bribes for the muse in the form of coffee and chocolate.

PS: My November blog posts will be brief missives from the writing battlefield. I’ll have to focus most of my time on the new WIP (work-in-progress). Wish me luck!