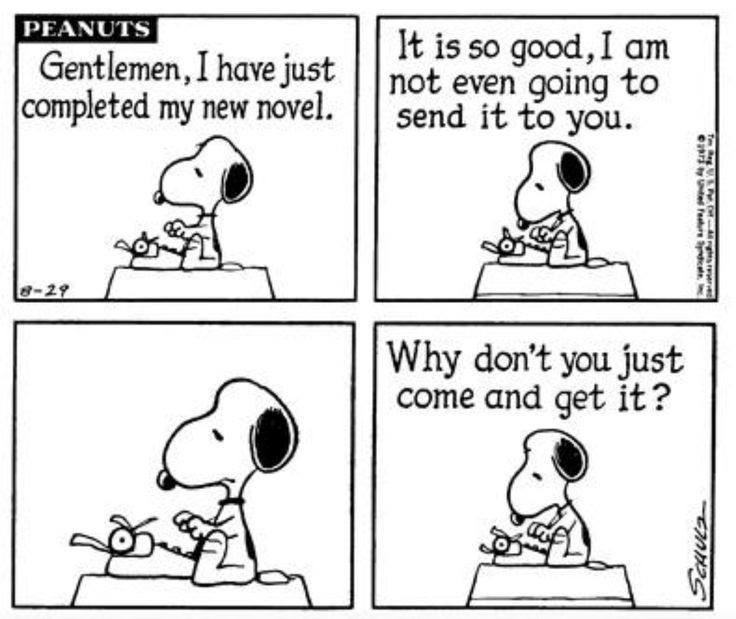 It’s been exactly one month since On the Verge went live on Amazon. Sales started off well (thanks, friends and family!), and then steadily tapered off, at which point I was cruising along at 1-2 sales per day. But I have recently hit a long dry spell. No sales for more than a week. Ouch.

This puts me in a melancholy mood for obvious reasons. Of course it would be amazing to see sales skyrocket or if not skyrocket than at least truck along at a decent clip. Hell, I’d go for lazy meandering at this point. Alas, even traditionally published books have trouble finding an audience. And, as is abundantly clear, and what every nay-sayer loves to reiterate, the trouble of finding engaged readers is compounded for indie authors. And when I say compounded, I actually mean multiplied by 1503300098888565: the number of self-published books released this year (give or take 450699908590602 or so).

How do you get your book noticed in this vast sea of stories? That’s one question. The other one, which I don’t like to think about as much, is: What should you do if your novel never manages to make a ripple?

The answer to the latter, at least for me, is to keep writing. It’s a pursuit I believe in. It brings me happiness, as trite as that may sound. Without paying readers, writing fiction becomes more like a hobby, but that’s okay. And there are things I’m doing in the meantime to drum up business.

Which brings me back to how do I get On the Verge noticed. Well, I’ve done a few things so far with my shoestring marketing budget financed by consignment sales of my kiddos old things. Here’s what I’ve done:

Bargain Booksy Promo: Included On the Verge in an email sent to readers interested in fantasy novels. Estimated sales: 2

Summary: Pretty slim pickings and definitely no return on my investment.

Virtual Book Tour  (10-12 “stops” on book blogs that will feature On the Verge through reviews, book spotlights, guest posts and/or interviews)

These last two are the most promising, but I think to take full advantage of them I need to do one more thing:

Reduce the price of On the Verge.

It’s already a bargain, I feel, at $2.99. Unfortunately, that’s not how the vast majority of eBook readers feel. That price may work for a midlist author with a solid following, but not for an unknown like me. For a book like On the Verge those readers are expecting .99 or FREE. Is that crazy? A little bit. But I think that’s the only way my novel is going to find some traction.

So the plan is this: List On the Verge for .99 beginning 10/17 (a book has to be listed at the same price for 30 days before it can go on promotion if you are enrolled in the KDP Select program on Amazon, which I am). Then hope that the Kindle Nation Daily sponsorship and blog tour generate some interest. At this point, I’m not so much interested in turning a profit as I am getting people reading On the Verge and liking it enough to post positive reviews. Because reviews, at the end of the day, are the best way to sell books online.

What is BookBub you say? It is, apparently, the great golden gorilla of book promotion tools with tales of authors featured in their daily promotional emails going from zero to hero overnight. But there’s a catch. Not only is BookBub super pricey it is also super choosy. You can’t just buy your way in. Your book needs to have reviews, good ones and lots of them, to be considered. From what I can see, 40 4-5 star reviews seems to be a minimum. If you get on BookBub your book has to be on discount and it can’t have been listed for a lower price within the last 90 days. My grand plan is to amass good reviews (hopefully), submit On the Verge for a Featured Deal, get accepted, and then list it for FREE.

According to the stats they have on their page, On the Verge as a BookBub featured deal would go out to 1.5 million readers who have opted into their fantasy genre email. On average, fantasy novels listed for free on BookBub get 21,700 downloads. Even if only a fraction of those go on to post a review that’s still a lot of exposure.

Step Two in my Grand Plan, which will occur with or without BookBub, is to write a second book for the series, sooner rather than later, and keep On the Verge with its respectable amount of positive reviews (again, hopefully) perma-free as a way of enticing readers to the series. Then I can maybe think of offering the new one for $2.99, okay maybe $1.99, with occasional promotions to .99.

Of course deciding when to delve into the writing of a second book is a whole other kettle of fish-eating goblins. National Novel Writing Month begins November 1st and I originally thought that would be a fun way to kick off my second book. It’s the way On the Verge began two years ago and participating in NaNoWriMo is fun. What’s not to like about a big group of like-minded nerds coming together virtually to do something they love?

BUT, I have some things on my to-do list that would have to go by the wayside to make NaNoWriMo happen including important stuff like studying up on my craft and spending time with my family without the specter of unwritten words looming over me (NaNoWriMo participants are encouraged to write 50,000 words during November. That’s about 1,666 words a day). Plus, I’ll be on vacation for a chunk of the month which makes setting aside time to write regularly a challenge. Oh, and did I mention that I’m also trying to grow my freelance writing business. You know, the kind of writing I actually get paid for?

All that being said, I’m afraid if I don’t get started soon I’ll lose my hard-won novel-writing momentum, and getting back to my earlier point, I kinda just love to write and I would do it for free. So I think the answer is this: keep writing, no expectations just fun, do NaNo but don’t kill myself over the word count goals, and keep plugging away at my marketing plan.

As a final note to this long post I am reading Austin Kleon’s second book Show Your Work: 10 Ways to Share Your Creativity and Get Discovered. I find his advice incredibly inspiring and he always includes these great quotes. One of them was from Honoré de Balzac a French novelist who worked during the first half of the 19th century. He said:

“For artists, the great problem to solve is how to get oneself noticed.”

This is from a writer working almost 200 years ago! So finding readers and getting exposure is not just a modern day problem, it’s a perennial problem and it comes with the creative territory. No one said this writing thing would be easy. But it’s one glorious bumpy ride.