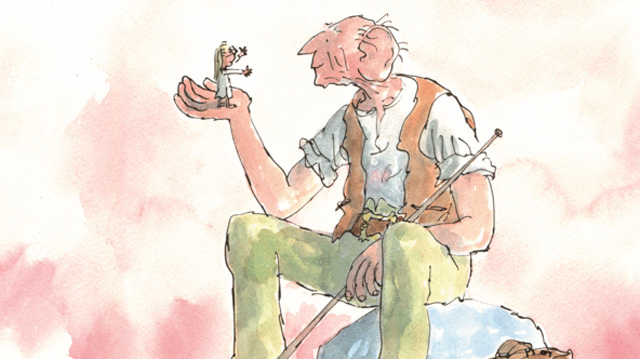 Several weeks ago I wrote about The Phantom Tollbooth (you can read that here), and how Norton Juster’s kid lit masterpiece sparked a lifelong love of books and fantasy. Well, I was feeling nostalgic again, and this time as my finger bumped across the well-worn spines of my childhood favs, it came to a stop on The BFG by the wondrous Roald Dahl of Charlie and the Chocolate Factory fame.

Roald Dahl was a novelist hero of mine as a girl. His stories were fantastic and charming, but also a bit raw and raunchy, just enough so I felt a little naughty reading them and a little sophisticated too, as though Mr. Dahl appreciated kids’ savvy enough to give them a taste of the off-limits stuff of adulthood.

The BFG is book about a giant (a big, friendly one) and a little orphan girl named Sophie. On the surface it’s quite a silly story, but as with most of Mr. Dahl’s work there is more to it than just a madcap adventure. It’s a story about unlikely friendships, dreams, and trust, bravery, the triumph of the underdog, and a good dose of justice.

All of these things along with the way the BFG speaks, with made up words and mixed up phrases, appealed to me as a girl.

Strangely enough however, those weren’t what I remembered best from The BFG. The thing I recall most vividly from this long ago childhood treasure is that it was the first time I learned about the witching hour. The book’s first chapter is actually titled The Witching Hour, and Mr. Dahl describes is thus:

The witching hour…was a special moment in the middle of the night when every child and every grown-up was in a deep, deep sleep, and all the dark things came out from hiding and had the world to themselves.

Just that sentence, that idea of the witching hour, seemed to describe so well the experience I had as a child of being awake in a silent house, when it seemed like all the rest of the world was faraway and fast asleep, and wondering what was waiting in the shadows.

For Sophie it turns out to be the BFG and he is obviously nothing to be frightened of, but Mr. Dahl’s hint was all I needed to confirm that my deep-seated suspicion of the dark was well-founded. Here an adult was being honest with me. The night was unknowable. Dark things lived there. And they weren’t all as friendly as the BFG.

Indeed the whole book is about the girl Sophie and her new friend figuring out how to stop a horde of evil giants that lurk about in the dark and snatch children (and adults, too) from their beds in the middle of the night and eat them whole. Turns out they require the queen of England’s help which they procure through crafting a wildly vivid dream that spurs her to their aid.

Beyond lurking innocently in the shadows, the BFG is a dreamsmith you might say, capturing them wild, bottling them and then combining them as needed. All the while, he retains a sense of respect for the mercurial nature of dreams.

“Dreams is full of mystery and magic,” the BFG said. “Do not try to understand them.”

This is good advice and, along with a healthy respect for the dark, hits on another aspect of the book that I carried with me through childhood: the power of dreams, both the subconscious and conscious variety.

The dreams we have in the middle of the night might be the brain’s way of making our hidden thoughts and fears manifest. They might just be random imagery strung together like a scattered memory slideshow. Or maybe a big friendly giant really does gather them for us in Dream Country and blow them in through our windows at night.

Whatever their origin, the dreams playing out in our heads as we sleep are not so different from the one’s that we pursue during the day. The former is the stuff of shadows, the latter are our passions followed, but both have magic in them.

Thank you, Mr. Dahl, for reminding me of that.

Incidentally, while I was searching for an image for this post I happened to discover that Steven Spielberg is directing a movie version of The BFG due out in July of 2016.