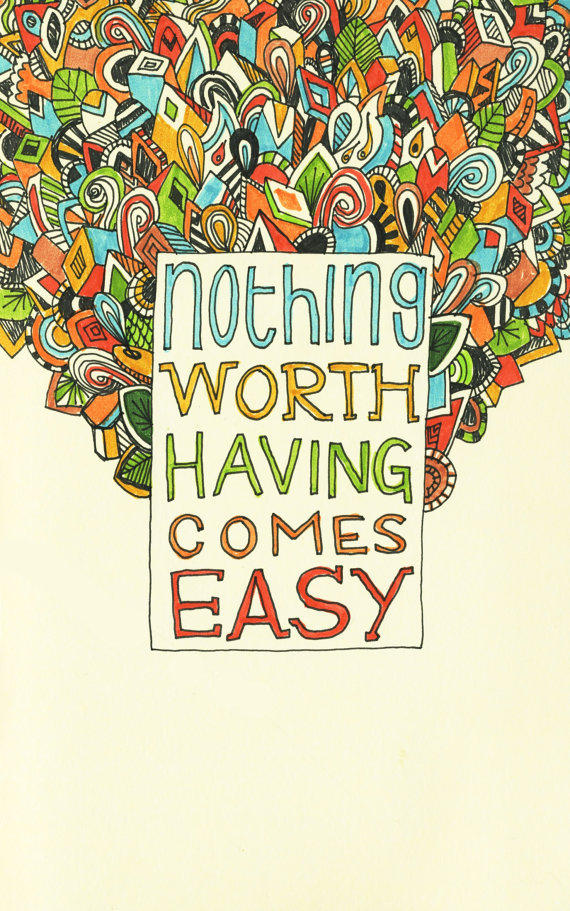 Perhaps the most surprising thing I’ve learned about this writing a novel thing is that the actual creative act of stringing nearly 90,000 words together into a coherent story was the easy part. It was fun. Even the stuff that at the time didn’t seem so great, like when I had to rewrite the first third of the book or do extensive line edits, was, in retrospect, not so bad. I was in control, sitting at my computer and adding value to a project I deeply valued.

When I finished ON THE VERGE in late summer of last year I felt elated, accomplished. I could check off a major life goal from my list. But after the initial euphoria wore off I began to wonder what I should do with my magnum opus. It seemed rather anticlimactic to just store it away in some dusty corner of my laptop’s documents folder. I hadn’t set out to get my novel published. I didn’t even have a plot or a general outline when I first began typing. I’d seen a poster for National Novel Writing Month (NaNoWriMo) in my local bookstore. It’s an awesome event that happens every year in November where (slightly delusional) people sign up to write a 50,000 word novel in four weeks. I decided just based on that one poster that I was going to go for it.

A couple of days before November 1st I signed up and I started writing ON THE VERGE longhand, in a chair at my salon while I waited for my hair to process. So yeah, it wasn’t really an auspicious start, but as I began to invest more effort into the project, the more I started to want to see something come from the fruits of my labor. It took me nearly a year, not a month, but after countless hours I had what I thought was a pretty decent manuscript and absolutely no idea what to do with it.

Without really thinking much of it at first I decided I might as well try getting it published. An absolute newbie to the process it took me some time to figure out how that was supposed to be done. What I learned is that the publishing industry is crazy selective and more subjective than an Olympic figure skating competition. Everyone and their uncle has written a book it seems, and all of those people are doing the same things you’re doing. Namely, researching literary agents that might be a good match and then writing what’s called a query letter to try and entice them to read their books. Think of the query letter as a combination of a resume cover letter and the inside flap of a book jacket: part author biography and part sales pitch. Send that letter, the first chapter of your book, and sometimes a synopsis in an email, and you’ve officially queried an agent.

It turns out that agents can get several hundred of these queries per month and unless you know someone that can somehow get your query special attention, your email will end up in the agent’s dreaded slush pile where all the unsolicited manuscripts go to languish for various lengths of time. A few weeks if you’re lucky, a few months if you’re not (I’ve even heard of people getting rejections back on queries they sent a YEAR ago).

Let’s say you write a killer query letter, the agent likes your first pages and they send you a request for more. Usually they start with a partial manuscript request of something like the first 50 pages. If they like that they might ask for the whole thing. If they like THAT then they might actually take you on as a client. But here’s the kicker. That doesn’t mean you’re going to get published. It just means you’ve made it through the first set of gatekeepers. Now the agent will query publishing houses on your behalf because none of them will take manuscripts directly from authors. So the process pretty much has to start over again, and you have to wait several more months for an editor to like your stuff enough to sign you. Then you get published (maybe, there are still things that can happen after you sign your contract with the publisher that can derail your book deal, see The Essential Guide to Getting Your Book Published: How to Write It, Sell It, and Market It . . . Successfully

for an extensive breakdown of how the publishing industry works).

The whole system seems quite strange and convoluted. It really hinges on whether you can grab an agent’s attention with a query letter that maybe has one or two paragraphs devoted to your story. How can you convince an agent your manuscript is worth their time in such a short space? The answer is you have to be really good at writing snazzy snippets that draw people in by piquing their curiosity. I’ve refined my letter several times, and I’ve still only succeeded in getting two agents and a digital publisher to take a look at my manuscript out of the dozens I’ve queried.

One of those agents, unfortunately, sent me a curt rejection after I submitted the first three chapters to him. It took him five weeks to send me a note that said he simply didn’t fall in love with the writing. That’s not much to go on as far as constructive criticism is concerned. Somehow that little note irked me more than the tens of other form rejections I’ve received, mostly because I had spent so much time and energy on the book, the query and everything that I had hoped for at least the courtesy of a more personalized rejection from this agent who had actually gotten my hopes up and requested more of my stuff. There was nothing in the note to indicate he had even read the three chapters I’d sent him. I have to say it stung. I followed my own advice and let myself feel crappy about it for a couple of hours and then I mentally moved on.

For something that initially started off as a bit of a whim I have now spent significant time and energy trying to get published, and I’ve even had a few leads, so for better or worse I’m taking it more seriously. I’m going to give it a few more months. I’ve queried 24 agents and 3 digital publishers since October. I know some aspiring authors query dozens, even hundreds of agents, over the course of several years in the hopes of getting published, but that path is not for me. I have a few other places I’m thinking of submitting to and if nothing comes of it after June I am giving up on the traditional route and self-publishing.

I’ve always fancied myself a bit of an entrepreneur anyway, I just never could decide what my business should be. It’s looking like it might be the business of self-publishing. In the meantime, cross your fingers for me. Maybe something will come of this crazy process after all.

Inspiration or Theft: My Novel's Origins

The List: 10 Goals for the Rest of the Year