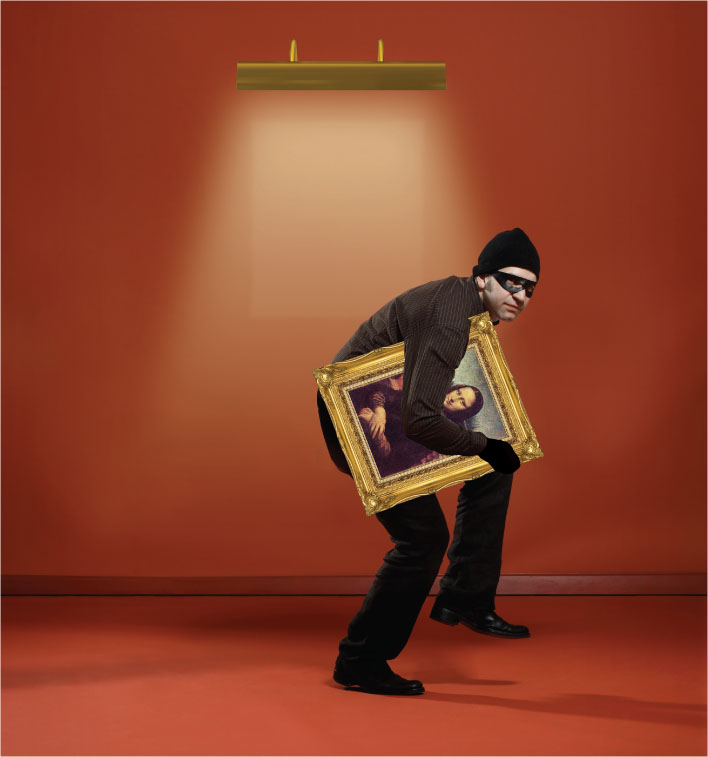 It was very late at night or, really, very early in the morning a few weeks ago, and I was on my way to bed after doing my night owl thing when I passed by my bookcase and my heart stopped. Okay, that’s a little dramatic. But still, I walked by those overburdened shelves like I do every night before bed, and I let my eye trail over the eclectic assortment of titles, old and new friends in the form of bound pages on a shelf, and suddenly it came to rest on the green-blue spine of a book by the humor and fantasy writer Christopher Moore.

It was a book I had read perhaps three or four years ago, and I hadn’t thought about it in almost as long. Sacré Bleu it’s called, a fantasy about the color blue set in fin de siècle Paris. It involves a seductive muse, a dastardly creature called The Colorman, and the most famous Impressionists and Post-Impressionists of the period. In a nutshell the muse, named Bleu, seduces artists so that they will create paintings using a special pigment, the sacred blue, that allows she and The Colorman, who supplies the pigment by harvesting it from Bleu’s body, to live forever.

In other words it shares some strikingly similar elements with my novel: the irresistible seductress preying on artists, the central role of the pigment and its strange origins, and the way paintings become mystical objects when the special color is used. There were even a few small coincidences like the briefest mention of the goddess Freya, after whom my main character is named, near the beginning of the story, and the fact that Franz von Stuck, who plays a pivotal role in my book, was an artist working in the same period (although part of a different movement) as the painters that form an integral part of Moore’s story.

I grabbed the book off the shelf and started re-reading it on the spot until I realized that I actually had to get up and function the next day. As it was, I lay awake that night in a mild state of panic. Had I inadvertently plagiarized Moore’s story? I hadn’t thought of the book in years. It never even so much as crossed my mind while I was writing On the Verge. Could my subconscious somehow have betrayed me and stored up those parts of Moore’s story I liked the best in order to regurgitate them as my own material when the time was right? Was I a fraud?

As things often do, the situation seemed better, less dire, in the morning. I spent the next few weeks re-reading Christopher Moore’s book, and I feel like I can safely say now that while there are parts of it that are similar to my story, On the Verge is a very different novel than Sacré Bleu.

But it did raise the question in my mind about originality. What makes a work of art original? When do you cross the line from using a source as inspiration to using it as a cut and paste template?

Enter Austin Kleon’s book Steal Like an Artist: 10 Things Nobody Told You About Being Creative. This New York Times bestseller is a slim volume laden with incredible nuggets of wisdom for, as Kleon puts it, “anyone who’s trying to inject some creativity into their life and work.” The most important bit of creative guidance, and the namesake for the book, is to steal like an artist. By that, Kleon doesn’t mean copying other people’s work and passing it off as one’s own. The idea behind his statement is that nothing is original. “What a good artist understands,” he says, is that “all creative work builds on what came before. Nothing is completely original.”

He calls this phenomenon the genealogy of ideas. You can’t pick your family, Kleon says, but you can pick the books, music, movies and other cultural and creative inputs you consume. “You are the sum of your influences,” he writes, and your artistic ancestors form the basis, the genetic makeup so to speak, of your creativity.

The concept of the artistic ancestor is actually indirectly addressed by Moore himself in Sacré Bleu. Near the end of the story he mentions one the main characters, Toulouse Lautrec, meeting with Oscar Wilde with whom he shares the wild story of The Colorman, and the creature’s ability to keep himself young through the power of magical paintings. In Moore’s story this is where Wilde got the idea for one of his most famous works, The Picture of Dorian Gray, a novel about an aristocrat that remains forever young while a portrait of himself that he keeps locked away shows him slowly aging. Originally published in 1891, Wilde’s story of course would have been the one that influenced Moore rather than the other way around. It’s an intriguing example of the fluidity of ideas throughout time within the very book that caused me to doubt the originality of my own story.

“Art is theft” reads a Pablo Picasso quotation in Kleon’s book. The trick, it seems to me, is raising the bar on what could be a simple smash and grab crime. How do you avoid the brutal directness of plagiarism, a mugging of someone’s idea, and transform it into something more akin to the elegant elaboration of a Thomas Crown Affair-style heist? The answer lies in the execution. All ideas have lineages. It’s the responsibility of the artist to pay tribute to these, not by replicating more of the same, but by using the artistic building blocks, passed down through the generations, to fashion something new, to give birth to the next great work in a family tree of interconnected creativity.