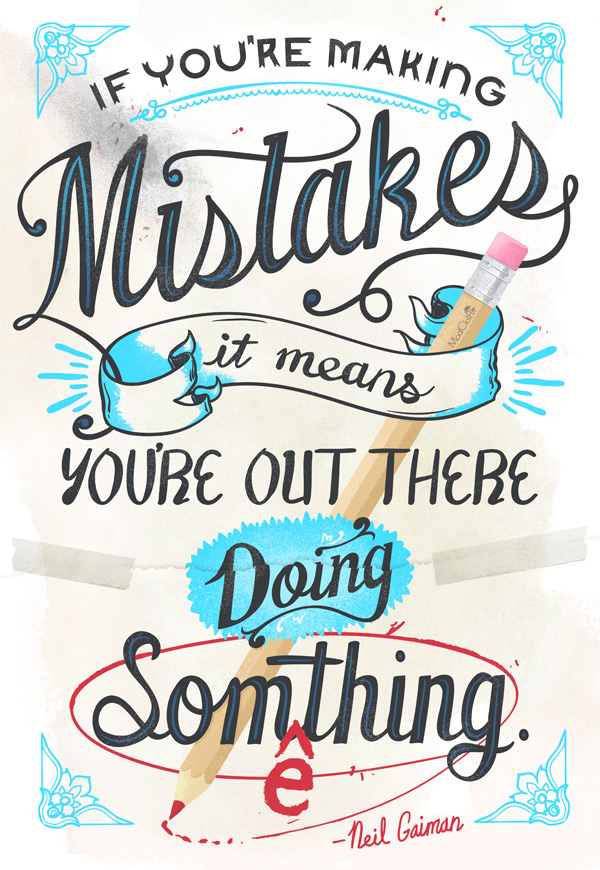 In a now famous commencement speech delivered in 2012 to the graduating class of Philadelphia’s University of the Arts my favorite author Neil Gaiman eloquently elaborated on the virtues of making mistakes.

When I read the speech later it was the first time I’d ever thought about mistakes in a positive light.

You see I’m a bit of a quiet, but dedicated, achiever. When I set my mind to something there is little that can keep me from going after my goal. I craft meticulous plans. I research and prepare. I commit time and energy. I set priorities. I stay focused. Eyes on the prize.

Most of all I try to avoid mistakes like the plague.

But here was my beloved Neil telling those hopeful grads to embrace errors. Not only that, but he said miscalculations and missteps could be useful.

“I hope you’ll make mistakes,” he said. “If you’re making mistakes, it means you are out there doing something.”

At first I recoiled from such an idea, but the more I thought about it the truer it seemed. I was afraid, though.

How can I be better, how can I compete, if I make mistakes? Wouldn’t a mistake reflect poorly on me? Wouldn’t it be a black mark on my record?

Maybe. Maybe in a world governed by rigid rules and expectations. In the world of school and the world of business people don’t ordinarily succeed by accepting their gaffes. In these traditional, competitive settings mistakes are to be eschewed at all costs, and if one does happen punishments are promised, apologies exacted. The incident itself is corrected as swiftly as possible and then swept under the proverbial rug.

The perpetrator, we imagine, feels embarrassed and ashamed. They vow never to make that mistake again. They become a little more circumspect, a bit more conservative. They stick to what they know. They play it safe.

You want to be a writer? You want to say things that matter, that people want to read? Yes? Then you can’t live in that safe zone. It just doesn’t work. You have to be willing to put yourself on the line, to be vulnerable, and real. To try and fail maybe, but to at least try.

So that is what I intend to do. No, I can’t entirely abandon my perfectionist tendencies, but I can put them in perspective. Perfection is unattainable, and it doesn’t allow for mistakes, but the perfectionist also doesn’t settle for mediocre. I can make that work.

I’m out there, and I’m doing something, and it’s awesome.

What would you do if you weren’t afraid of making a mistake? You should go do it.

Image credit: Quote of the Day on ModCloth